Although Bitcoin’s (BTC, Tech/Adoption Grade “A-”) fevered advance seems to have temporarily stalled just shy of $40,000, its epic rally over the last three months has taken out one resistance level after another.

For example, it was only mid-December when Bitcoin finally broke above major overhead resistance coinciding with its 2017 high (near $20,000).

Along the way, Bitcoin also made more money for investors in 2020 than any other major asset class. It outperformed U.S. stocks and long-term government bonds, roughly 16-to-1.

Performance like this commands attention. This is why we’re starting to see sentiment in favor of crypto pretty much across the  board.

Tech companies, hedge funds and other big investors who once eschewed all things crypto are now tip-toeing gingerly in. For example …

So, you see, not only is sentiment shifting broadly in favor of crypto, it’s positively going mainstream. This is massively bullish for Bitcoin.

But in case you still think lightning can’t strike twice … that another 2017-like season cannot possibly lie ahead for Bitcoin in 2021 … consider this: By their very nature, certain crypto assets have …

An Intrinsic Affinity for Parabolic Breakouts

The reason is simple.  In virtually every conventional financial asset class, sharply rising prices lead to expanding supplies — which then act to dampen further price gains. 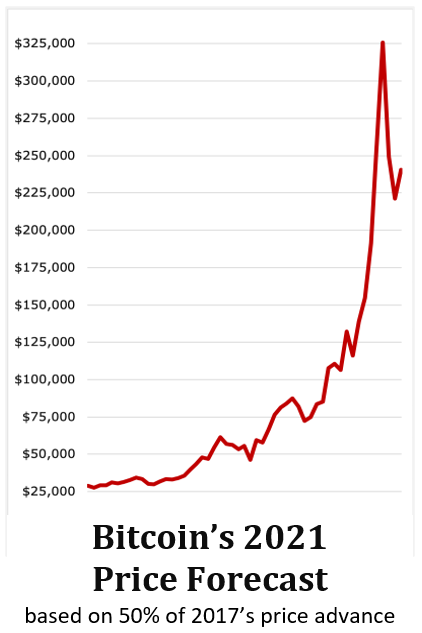 When gold prices shoot up, miners take advantage of them to develop lower-grade deposits that were previously uneconomic to produce.

When property prices go through the roof, real estate developers sometimes even expand into flood plains, or drain swamps in order to obtain more square footage to sell.

Bitcoin simply doesn’t work that way. That’s because it has a hard ceiling on how many coins can ever be produced (21 million) — no matter what happens to prices.

So, what happens when surging demand for crypto — like we’re starting to see now — collides with inelastic supply?

Prices have nowhere to go but up. That’s just Economics 101.

This is why crypto markets routinely go into exponential parabolic uptrends … only to crash back down, recover and then shoot for the stars again.

On top of that, every time a crypto bubble pops, valuations never actually come back down to where they were before.

That’s because each successive bubble brings in new people, many of which never leave.

In fact, this is how the crypto universe grows: By sucking new people in during bull runs. Then, by consolidating and expanding infrastructure during the bear markets that inevitably ensue.

And all this, of course, merely lays the groundwork for the next parabolic upsurge. When even more folks jump into the bandwagon.

How long will these dynamics play out?  Hard to say for sure. But even this bull market likely still has close to another year or so to run.

The time to jump on board the Bitcoin bullet train is now. While tickets to ride are still affordable ….