Chainlink Rises Against the FUD

Let’s start with the June 2020 issue of Weiss Ratings Crypto Investor, where we talked about a “little-known crypto at the sweet spot of the information explosion”:

The vast majority of the 2,647 cryptocurrencies listed by CoinMarketCap.com trade on nothing more than hopes and dreams. Only a few have real-world use cases.

And, of those, almost none are as well-positioned to cash in on the most explosively expanding segment of the crypto revolution, the burgeoning growth of smart contracts, as Chainlink (LINK, Availability/Liquidity Grade “B”).

Smart contracts are at the heart of everything cryptos do (beyond just making payments). So, it’s hardly an exaggeration to say they pretty much are the future of crypto.

Starting with Ethereum, virtually all second- and third-generation cryptocurrencies use smart contracts in some way or other.

Well, Chainlink’s profile is rising, as we noted in a July 24 tweet:

#DeFi platforms are red-hot with nearly $1b in collateral pledged. Oracles empower not only DeFi, but just about everything that 2nd & 3rd-generation cryptos do. So, it's hardly an exaggeration to say that #Chainlink will lie at the heart of the #crypto revolution going forward.

Indeed, the real-world viability was recently validated in a statement from Deutsche Telekom’s T-Systems unit announcing a “node operator” agreement with Chainlink:

By providing real-world data to the Chainlink network, T-Systems MMS engages in a so-called ‘generalized mining’, where it provides an IT service to a blockchain network while getting paid in digital assets for reliably doing so. As there is a significant value locked in DeFi, such IT services play an important role in the overall Ethereum ecosystem.

And, according to CryptoCompare, Chainlink’s social media presence is rising along with its price: 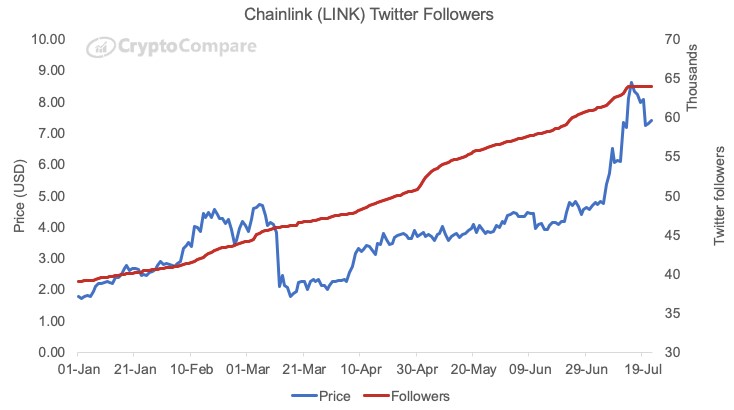 An outfit calling itself “Zeus Capital” is exploiting Twitter’s advertising platform to “promote” a tweet that calls Chainlink a “Russian pump-and-dump fraud.” Here’s a screen shot; we’re not going to link to it:

A couple things to note about this tweet, “Zeus Capital” and its social-media presence … on their website, these guys claim to operate in New York and London, but they include none of the required Securities and Exchange Commission and/or Financial Conduct Authority disclosures in their “research report.”

Also, they claim to offer a “private” fund. But, according to prevailing securities laws, they’re not allowed to market such an offering to U.S. investors.

And we will link to this tweet from the “real” Zeus Capital disclaiming the Chainlink “research report”:

It has come to our attention that a company called Zeus Capital LLP has published a research report relating to crypto currency & Chainlink.
For the avoidance of doubt we would like to state that Zeus Capital Ltd has not produced research on this subject. https://t.co/RG6WvywYUS

Let’s close with a couple takeaways …

No. 1, Chainlink is a good project that’s in its early stages and so will have flaws. But the long-term prospects are bright.

And, No. 2, make sure you have a good, trustworthy, working information filter.

That’s how you cut through attempts like this one from “Zeus Capital” to exploit “fear, uncertainty and doubt.”