Crypto Is Immune to These Headlines

In terms of price action, things have actually been rather dull in the crypto space, with most assets trading in narrow ranges over the seven days through Thursday, even into Friday.

President Trump tested positive for COVID-19, and the Commodity Futures Trading Commission (CFTC) and the U.S. Department of Justice are going after the world’s first crypto derivatives exchange, BitMEX.

How have these two events affected crypto assets as a whole?

Well, judging by the price action we’ve seen so far, they haven’t.

With regard to the Weiss 50 Crypto Index (W50), we note first its narrow range, with the week-to-week change coming in at 0.79% as of Thursday’s close. 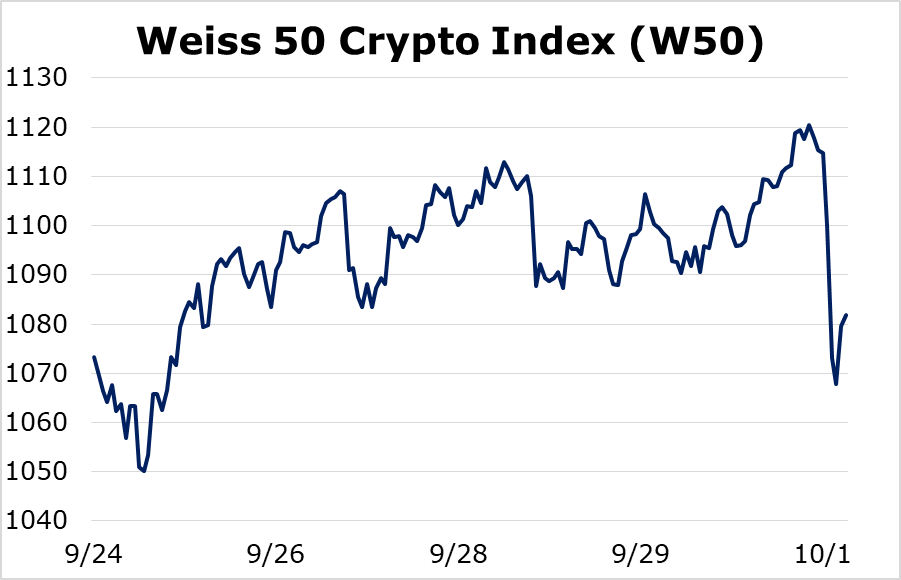 There is that quick reversal at the far right of the chart. This marks the initial reaction to the CFTC’s announcement of a “civil enforcement action” against BitMEX for operating an unregistered crypto derivatives trading platform and violations of other regulations.

What isn’t shown in this chart is the rally that followed this knee-jerk reaction after crypto traders had time to digest the implications — or lack thereof — of this event.

Now, the news of President Trump testing positive for COVID-19 was largely treated as a non-event in these markets, as crypto assets remained essentially unchanged as of midday Friday.

The same is true when we strip out Bitcoin. The Weiss 50 Ex-BTC Crypto Index (W50X) did fare a little better, with altcoins finishing the week up 3.47%. The chart reveals the same pattern we saw with the W50: a mostly positive week with a knee-jerk reaction late Thursday. 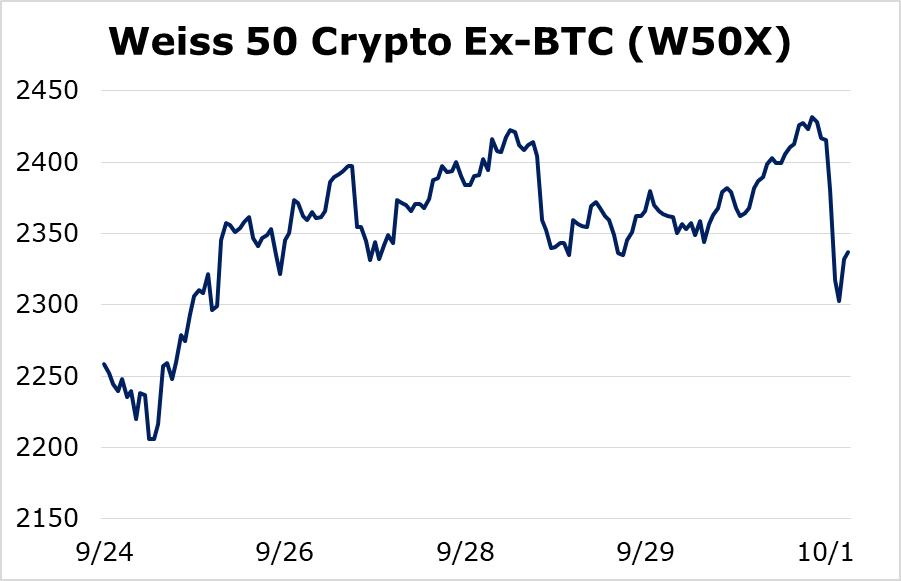 The market-cap splits reveal much the same.

The Weiss Large-Cap Crypto Index (WLC) finished the week down 1.05%, mirroring the action in the W50 as well as the W50X. 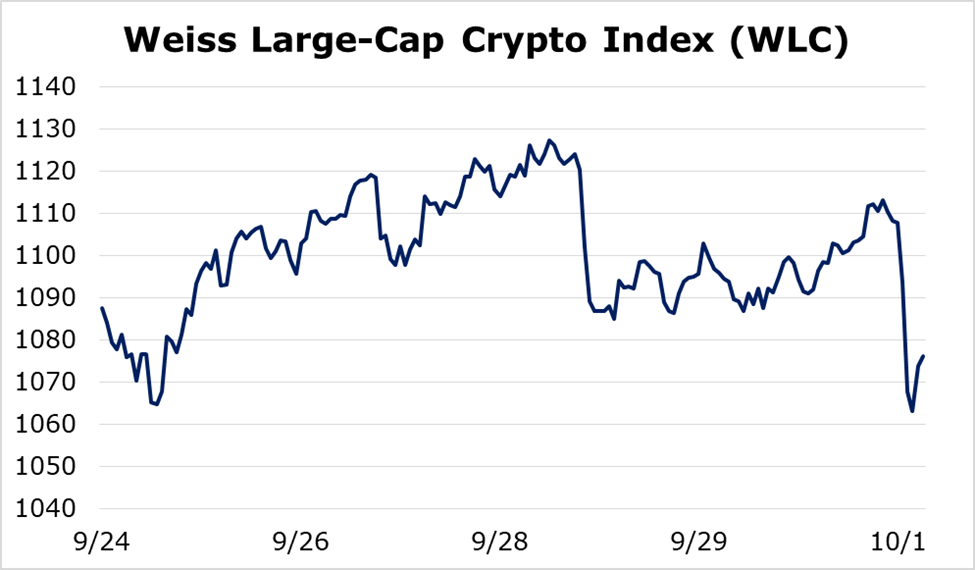 The Weiss Mid-Cap Crypto Index (WMC) traded more in line with the altcoin complex as a whole, rising 3.85% over the seven-day trading week. 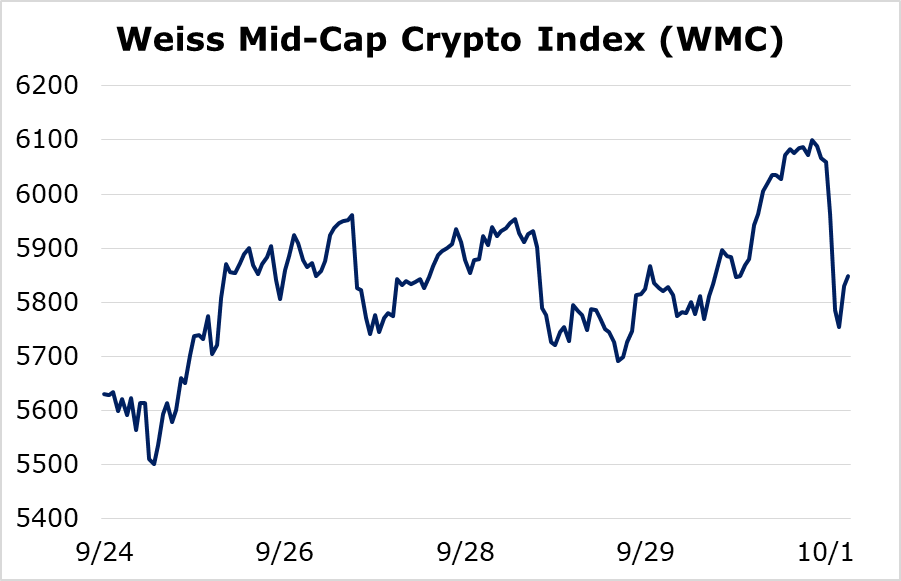 We see the most weakness coming out of the small caps, as the Weiss Small-Cap Crypto Index (WSC) shed 4.27% for the week. 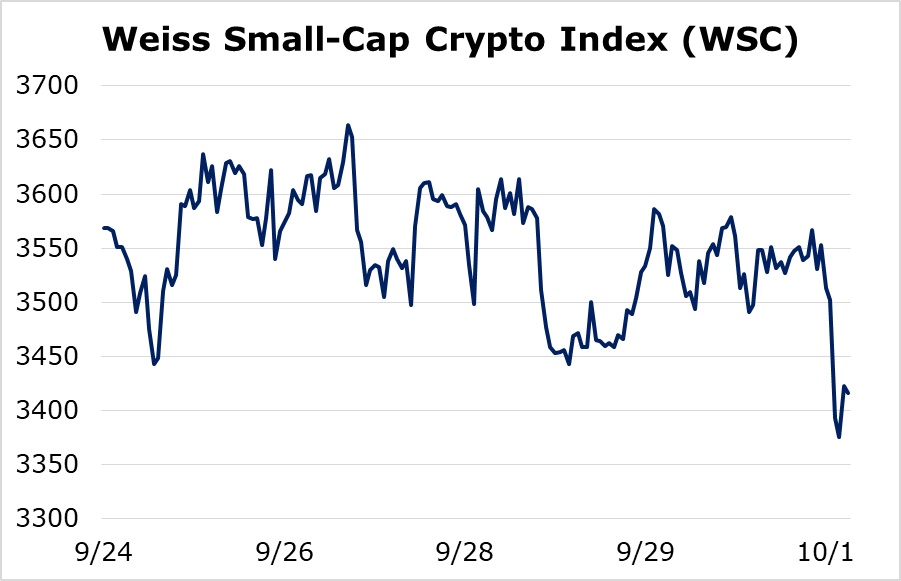 It’s quite interesting to see the small caps faring the worst this week because this is the sector least affected by headlines. This tells us that crypto assets are largely trading based on their own internal dynamics.

And, let’s face it: The fundamental reason people flee to crypto is in no way affected by the headlines we’ve been treated to this week — or will be treated to in the hours, days and weeks to come.

Crypto assets are in a long-term bull market because governments have used — and abused — their power of the printing press to try to stave off economic contractions. Not only are reckless money-printing schemes ineffective at creating economic prosperity, the only thing they do cause in the long run is widespread asset-price inflation, increasing economic inequality along the way.

This is as true now as it’s been throughout history.

The political tensions caused by the reckless mismanagement of the economy can be felt the world over, and neither of the men vying for the White House, or the political parties they represent, have any hope — or intention — of stopping these long-term trends.

Crypto is a shelter — perhaps the only viable one — against the monetary insanity that’s taken over the world’s most developed economies.

At the same time, the CFTC and the Department of Justice going after BitMEX — the oldest crypto derivatives exchange — is also a non-event. It’s been known among market participants that BitMEX has been in the crosshairs of U.S. regulators since at least 2019.

Most derivatives exchanges know better than to serve U.S. customers. And virtually all of them have strict “know your customer” requirements to enforce these policies.

From a big-picture perspective, this is damaging for the U.S.-based crypto industry only.

And all it accomplishes is to reinforce yet another trend that has also long been in motion: The crypto industry is unable to thrive in the U.S. and most developers and talent are moving offshore to build their products.

It’s precisely because these two developments only reinforce what we already know to be true: Crypto assets have remained unfazed in the face of what, on the surface, seem like “shocking” events.